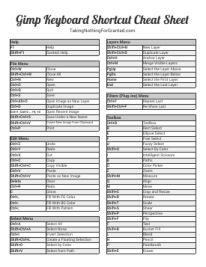 Today marks the end of my series on Gimp, so of course I have to close out with a combination of my favorite things — keyboard shortcuts and cheat sheets!

Gimp, like most programs, utilizes many (120+) keyboard shortcuts to make its use very quick and simple — assuming you can memorize enough of them!

In addition to the standard shortcuts — which are re-iterated in this cheat sheet, for convenience, despite the fact you’ve hopefully memorized them already! — there are a number of shortcuts that quickly select tools, dockable dialogs, menu options, and more. Today’s topic is a continuation of last week’s lesson on the Vi/Vim editors.

The command possibilities available in Vi are seemingly endless; as such, they are not all covered in this cheat sheet.

What this cheat sheet does cover, are all of the basic commands for navigating Vi and modifying, searching, replacing, exiting, etc.

Remember, Vi is case-sensitive; any letter that you type can mean two completely different things, depending on its case.

I like to use this cheat sheet as a quick reference, as I have not yet managed to memorize all of these commands.

I hope that you find it as useful as I do. You had to know it was coming. What’s a shortcut without a cheat sheet full of them?

This cheat sheet is a compilation of the Linux command line shortcuts (keyboard and otherwise) mentioned in the past few articles.